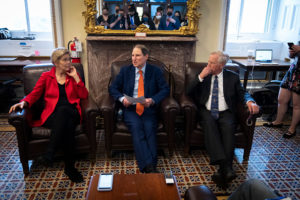 Sens. Elizabeth Warren, Angus King, Maine Indepedent, and Oregon Democrat Ron Wyden offered the tax as an alternative to the Democrats’ original plan, which would raise the corporate income tax rate to at least 25% from the current 21%.

Lawmakers including key Senator Kyrsten Sinema of Arizona have objected to the income tax hike. The 15% minimum tax would only apply to companies that make $1 billion or more in income for three consecutive years, which means roughly 200 corporations, according to the sponsors.

“A minimum corporate tax would stop the giants from paying $0 in taxes after raking in massive profits — yes, Amazon, I’m looking at you. We’ve got to get this done,” Warren wrote in a tweet.

Sinema indicated she would support the minimum tax, calling it “a common-sense step toward ensuring that highly profitable corporations — which sometimes can avoid the current corporate tax rate — pay a reasonable minimum corporate tax on their profits.”

But according to The Wall Street Journal, “it isn’t clear yet what will be in the final bill, and the late-emerging proposals have encountered resistance among House Democrats, while Republicans continue to be unified in opposition to the Biden agenda.”

The House Ways and Means Committee in September approved about $2 trillion in tax increases, relying on increases in marginal tax rates on corporations, individuals, and capital gains.

Warren said she and her colleagues have “engaged extensively” with the Senate Finance Committee, the White House, and the Treasury Department to develop the minimum tax proposal for inclusion in the Build Back Better bill.

The tax is similar to the Biden administration’s proposal in March for a 15% minimum tax on the amount of income corporations publicly report on their financial statements to shareholders, known as “book” income.

“Manufacturers and tech companies could be among those hardest hit by the plan, because the tax breaks they currently benefit from, such as expensing capital investments or stock options, would effectively be limited,” the Journal said.

Fri Oct 29 , 2021
The U.S. economy grew in the third quarter at the slowest rate since the pandemic recovery began in the spring, reflecting the impact of the delta variant and supply-chain constraints. The Commerce Department reported Thursday that gross domestic product rose at a 2.0% annualized pace in the third quarter, below […]