In wet snow and cold rain, mothers began abandoning their cars to walk for hours, prodding exhausted children as they dragged their strollers and suitcases along the road.

Near them, jam-packed sedans running low on gas inched to a modest checkpoint that ordinarily serves a half dozen people at a time, often day-trippers crossing into the duty-free zone to buy cigarettes.

Inside the checkpoint, two Ukrainian immigration officers have been frantically trying to keep up with one of the fastest exoduses from any country in modern history.

In just a week since the war with Russia began, more than one million refugees have left Ukraine, most headed west into Poland, Hungary, Slovakia, Romania and Moldova.

At the current pace, by the weekend, more asylum seekers will have entered the European Union in a matter of days than in all of 2015, when 1.3 million people crossed from the Middle East and Africa into the bloc. That would make the rush from Ukraine the continent’s biggest refugee crisis since World War II.

Most of the people are fleeing to a single country, Poland, where helicopters buzz over the militarized border between Ukraine and the U.S.-led NATO alliance.

How will the Ukrainian diaspora change the way the European Union handles refugees? Join the conversation below.

The sudden arrival of hundreds of thousands of people has jolted many European governments, which didn’t consider a Russian invasion as imminent as the U.S. did, and hadn’t foreseen the massive exodus.

Two days into the war, which began last Thursday, no EU member state had requested tents, blankets or other basic necessities from the bloc’s emergency reserves.

On the eve of the conflict, Poland’s local governments were still scouting potential locations—town halls, stadiums, schools—for an inflow that it estimated would reach no more than one million people in all.

A week later, Poland is more than halfway there.

It took a procession of volunteers on both sides of the border to manage the mass displacement of Ukrainians. In roadside villages in Ukraine, lined with wheat and lavender fields, elderly residents set up stands stacked with free food from their own pantries, as shelves at local gas stations ran bare. Others walked along the traffic, offering soup and porridge to passengers stuck in cars and to families trekking beside them.

“I saw hundreds of them, mothers with children passing by the cars, day and night,” said a 29-year-old IT worker who sat in her car for four days before crossing into Poland. “They literally drag their feet and these children. They don’t have energy and strength. They throw their luggage into ditches, because they are not able to carry it with them.”

Many of the refugees traveled to the border in trains packed to standing with women and children, the lights off and the curtains closed with cell service blocked. The journey, normally about two hours, took 18, as the train stopped for hours and a time and wound slowly down alternate tracks.

On the Polish side, in the border town of Przemyśl, a crush of volunteers turned a parking lot across from a shopping mall into a small tent city, directing confused refugees into buses. Nearby stood a line of people holding cardboard signs for countries they were willing to offer free rides to: the Netherlands, Italy, Germany, or France. Kitchen crews fried crepes with chocolate for children, and offered toiletries and medical assistance.

“Nobody told us to come here. Nobody, including us, knew what to do. We had to figure it out ourselves,” said an aid worker who was scrambling to find medicine for a group of sick children.

A government spokesman said the mobilization by volunteers made it possible for authorities to process the historic influx of refugees. “We act together as a state and as a society,” he said. “So the synergy effect of the state and the society is helping incredibly with the guests from Ukraine.”

Whatever the duration and outcome of the war, it is likely the conflict will deposit an enormous diaspora of Ukrainians in the EU, reshaping politics, society and the refugee population on the continent. 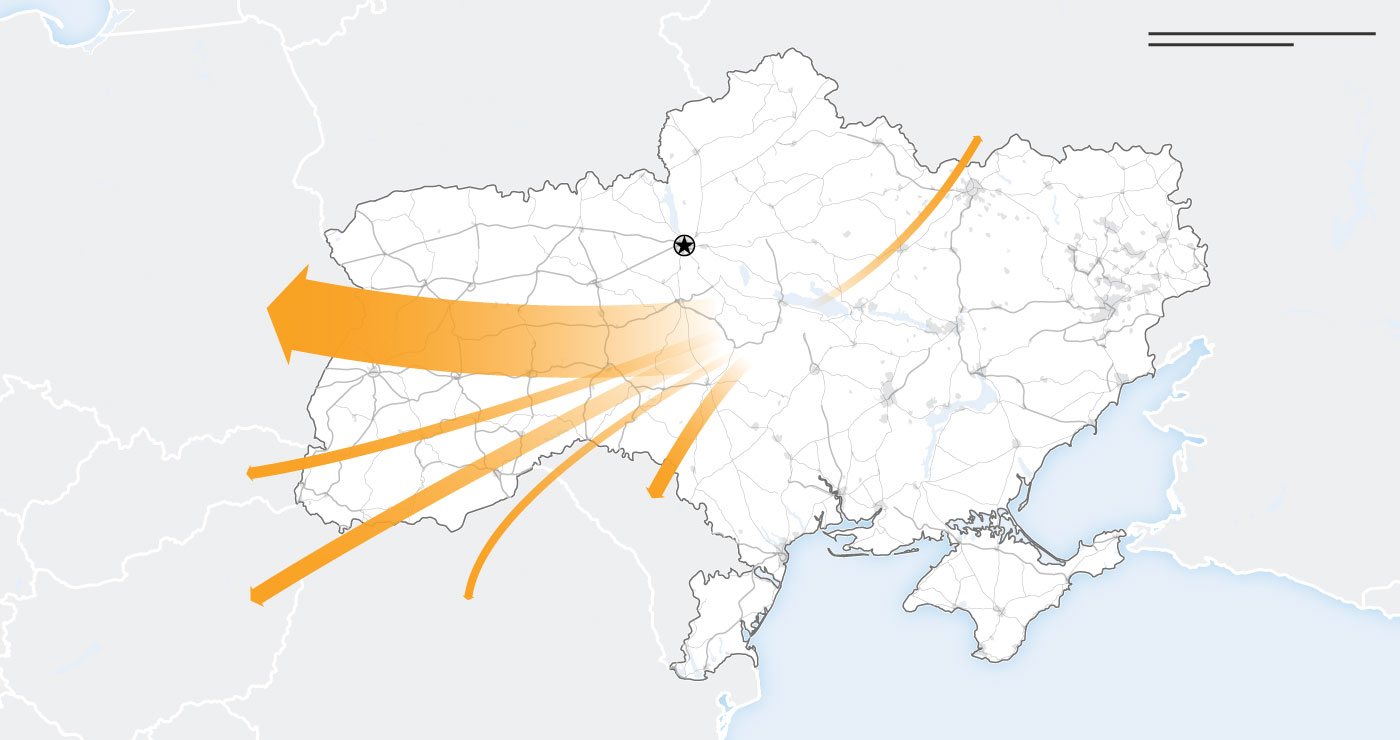 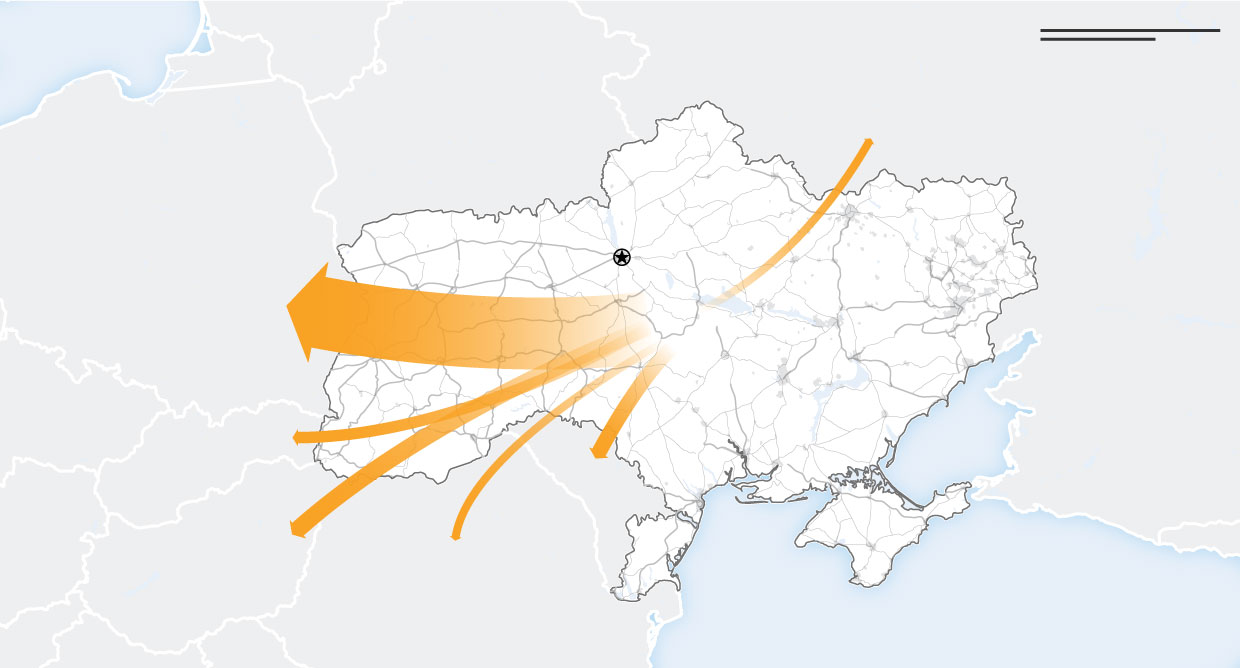 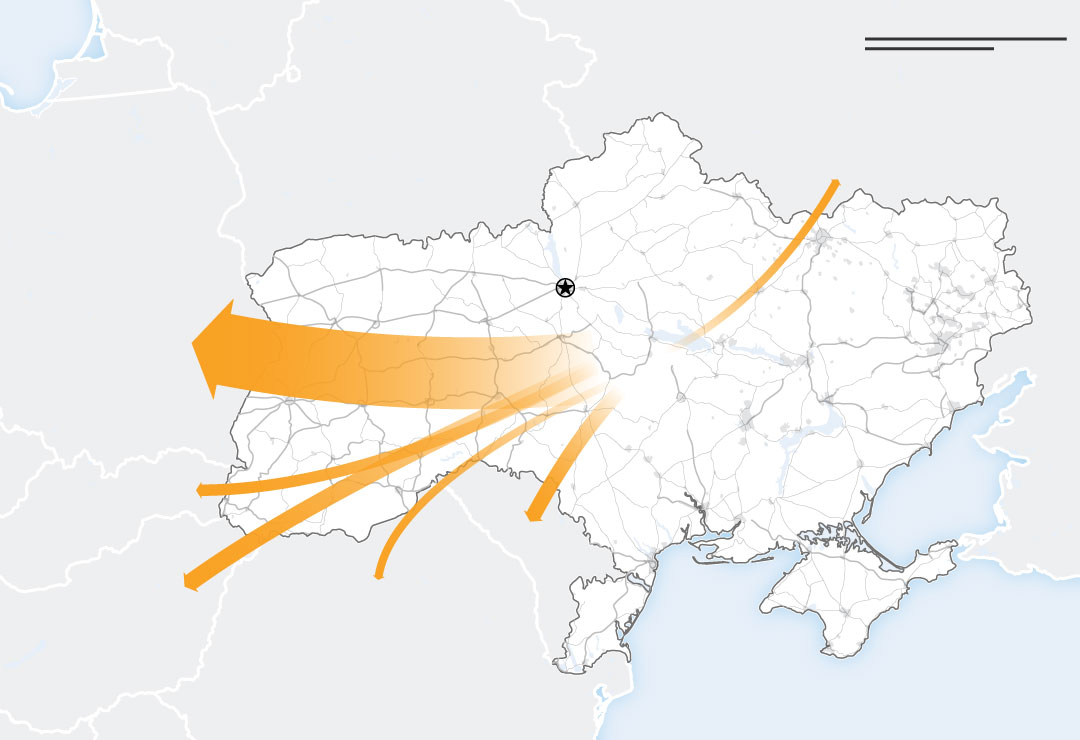 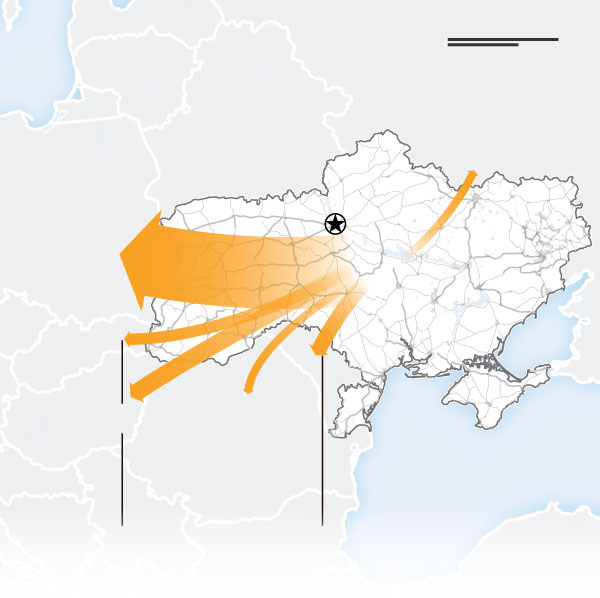 The U.N. Refugee Agency expects four million Ukrainians to seek shelter outside the country, a number that could rise depending on the severity of the war. On Thursday, EU member states’ ministers gave their backing to a proposal for two-year residence and work permits for Ukrainians entering the bloc, measures that will also give them access to housing, medical coverage, schools and social-welfare assistance, and it is expected to be formally approved.

The massive movement of people will likely have long-term implications for Europe, especially Poland, whose population has been steady at 38 million since 1987. The country has had very few ethnic minorities since World War II, when Nazi occupiers exterminated Poland’s huge Jewish community and other minorities either fled or found themselves on the Soviet side of redrawn borders.

After Russia seized Crimea in 2014, between one and two million Ukrainians moved to Poland, seeding a vast new diaspora that has become a fixture in a country historically accustomed to emigration.

Poland’s government, has tried to restrict the flow of asylum seekers—largely from the Middle East and Africa—who tried to enter this winter from Belarus, and it was opposed to an EU plan to redistribute refugees who entered Germany in 2015, mostly from Syria. But it has welcomed these Ukrainians, who speak a similar language and have found jobs in everything from local shops and restaurants to real estate.

That diaspora is likely to expand into Western Europe.

In Germany, over 5,000 refugees have been registered since the start hostilities last week, with over 1,300 people arriving by train to Berlin alone on Tuesday. Many were headed to join relatives in other countries, such as Italy.

At Krościenko, a tiny border post in the Polish mountains, Ukrainians crossing the border are being picked up by friends and relatives arriving in cars from as far as Norway, Finland, Switzerland, Germany, Latvia or Lithuania.

announced the invasion in an early morning speech last Thursday, a line of cars and a crowd of pedestrians formed at Ukraine’s western border with Medyka, Poland.

Soon, the border point was choked, with refugees standing eight hours before they could cross on foot.

“It’s pure chaos here. All our buses are full,” said the driver of a bus last week. “This is just the beginning.”

On the Polish side, bus drivers jostling for space on the narrow lanes argued loudly, as confused refugees like Diana Kurzienkova, a 21-year-old Ukrainian woman who was escorting her eight-year-old sister, stumbled across. Her phone was pinging with Viber and Telegram messages from other Ukrainians on their way.

By Friday, cold rain pelted a line of refugees waiting more than 20 hours to cross. In one Polish town near the border, local authorities begged their bosses to dispatch tents, electric generators or bedsheets, only to learn an emergency supply depot they had been counting on didn’t have them.

“They simply didn’t believe us that the scale of this crisis is so overwhelming,” said a local official. Eventually, the fire brigade sent buses to collect refugees as they crossed into the Polish side, and cooperation improved.

Cars were parked for more than a mile on the Polish side of each of the major border crossings, as relatives waited for their loved ones to cross. On the Ukrainian side, EMTs rushed through a crowd of families waiting in the cold and wet weather without shelter. Volunteers delivering food faced scrums of people that emptied their boxes immediately.

A damaged building after shelling by Russian forces in Ukraine’s second-biggest city of Kharkiv.

A damaged building after shelling by Russian forces in Ukraine’s second-biggest city of Kharkiv.

By Saturday, the wait to cross into Poland had grown to two days, with some walking 25 miles to the border. Cases of diarrhea and other ailments began to spread on the Ukrainian side of the border, while shoving matches broke out as refugees competed for space at the gates.

Ukrainian border guards began holding African and Middle Eastern refugees aside for days, giving priority to Ukrainians, who were mostly mothers with children.

As they crossed through the green metal gate into Poland, firefighters took hold of their suitcases, rolling them onto waiting busses, while others helped carry children.

“We have too few volunteers, so many refugees,” said one volunteer helping refugees stumbling into a parking lot to direct their next move.

Fri Mar 4 , 2022
PARIS—French President Emmanuel Macron verified just forward of the deadline that he strategies to run for re-election up coming month, officially kicking off a marketing campaign that the war in Ukraine has overshadowed. Mr. Macron declared his candidacy in a letter printed by several regional newspapers on Thursday, an unusually […] 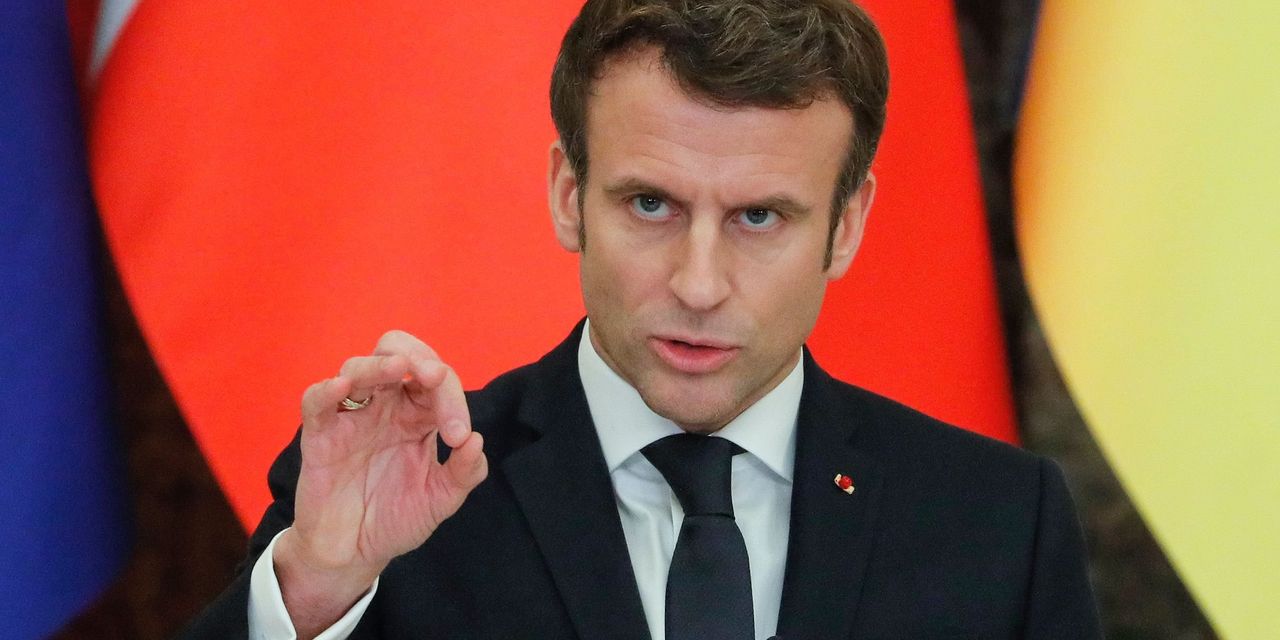